Congratulations to the 2019 Festival of Seas People’s Choice Award Winners! 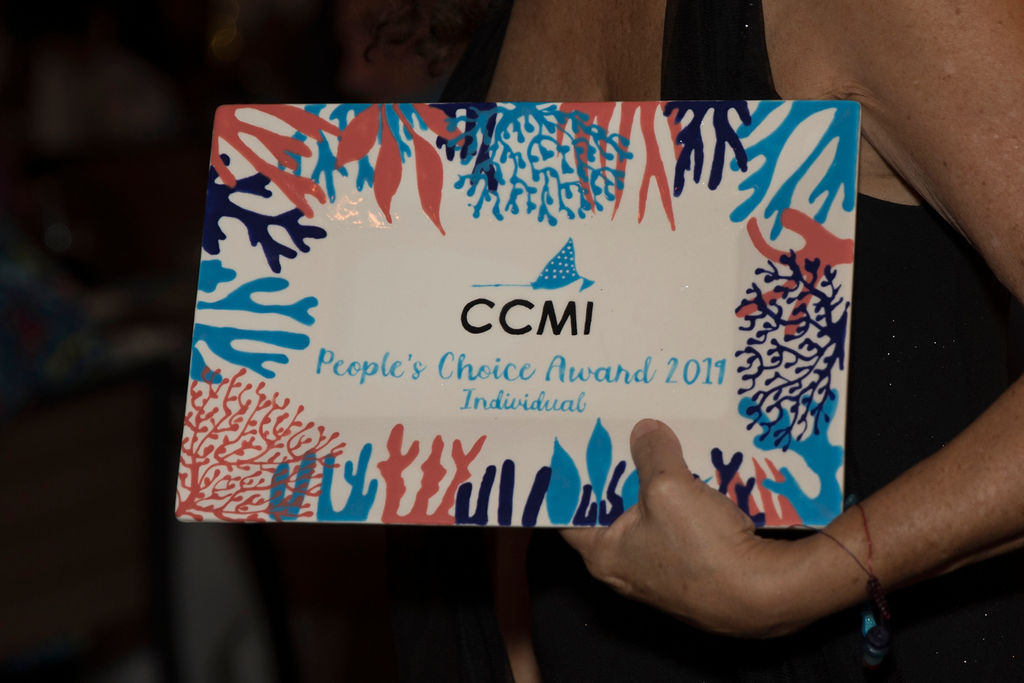 The Cayman Islands has many individuals who are passionate about protecting and preserving our marine environment, and the Central Caribbean Marine Institute (CCMI) shined a spotlight on local leaders, bold innovators, creative thinkers and those who give generously of their time and talents to ocean and coral reef conservation efforts in the Cayman Islands at the Festival of Seas gala on 16th November 2019, at Grand Old House. The People’s Choice Award is a full ‘community participation’ effort, with nominees coming from members of the community, who are later voted on by the general public in an online system. This year, two People’s Choice Awards were announced: an Individual and Company/Organisation that has contributed in a significant way to protecting and/or restoring coral reefs in the Cayman Islands. A total of 622 votes were recorded for the Company/Organisation category, while 1502 votes came in for the Individual category! The winner of the Individual People’s Choice Award category is Michael Ridley, who won for his effort to launch Project Turtle Beach, which provided security cameras and monitoring on an extremely active nesting sea turtle beach in West Bay. A Caymanian living in Miami, Mr. Ridley crowdfunded more than US $16,000 to implement security monitoring on this beach as a way to deter poaching and provide information aiding the Cayman Islands Department of Environment (DoE). It was implemented 1st July 2019, and was up for four months.

On his GoFundMe page, Mr. Ridley wrote, “Over the past decades, the Cayman Islands has seen unprecedented economic and development growth which has brought many benefits to the island and population. However, this development has meant that natural habitats for animals in the Cayman Islands have been compromised. This is especially disruptive for turtles as where they nest is prime beachfront property.”

He hopes to continue with this effort, with the goal to expand and have monitoring on other critical beaches. The winner of the Company/Organisation People’s Choice Award category is Protect Our Future Cayman for student environmental advocacy efforts.

This student-led organisation has come together to push for action for the environment as they are very concerned with the state of the environment. Their advocacy started with a photo campaign to raise awareness about environmentally-sensitive native species in Cayman and built momentum to where they helped organize a school walkout and demonstration at the Government Administration Building. They have spoken with various government officials about their concerns and have taken their message to the media, appearing in radio, TV and print news with their conservation concerns.

The other nominees for the Company/Organisation Award were Pirates Week Festival (Pirates Against Plastic) and STOAK’D Cayman (artwork made from plastic debris found during local beach cleanups).

Whether through a project, programme or event, all nominees demonstrated leadership and commitment to bringing about a transformative impact on the ocean habitats, especially coral reefs, in the Cayman Islands. By featuring members of the community and their efforts on behalf of the environment, CCMI is recognising those who have made significant positive impact on the marine environment with a goal of also inspiring others to get involved in conservation initiative

Full details of each nomination can be found on the CCMI website at www.reefresearch.org/peopleschoice2019. For more information about the Festival of Seas Gala: Coral Carnival and the critical work CCMI does to research and restore coral reefs, visit www.reefresearch.org.