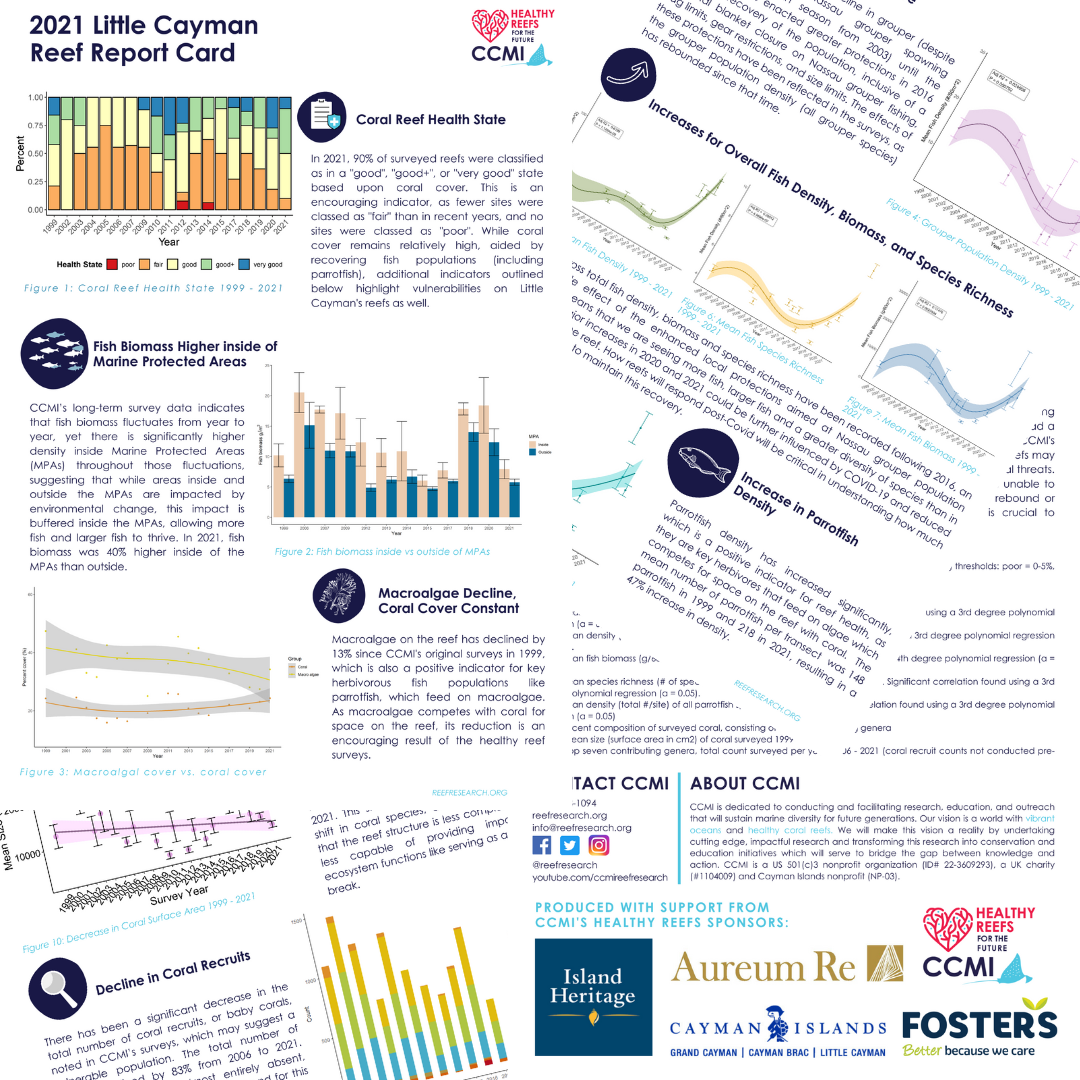 The positive results from CCMI’s surveys indicate increases for overall fish density, biomass, and species richness following 2016, an apparent ripple effect of the enhanced local protections aimed at Nassau grouper population recovery. This means that we are seeing more fish, larger fish, and a greater diversity of species than in previous years. Major increases in 2020 and 2021 could be further influenced by COVID-19 and reduced overall activity on the reef.

CCMI’s survey data also shows that while fish biomass (total weight of the fish population) fluctuates from year to year, there is significantly higher biomass inside Marine Protected Areas (MPAs) throughout those fluctuations. This suggests that while areas inside and outside the MPAs are impacted by environmental change, this impact is buffered inside the MPAs, allowing more fish and larger fish to thrive. In 2021, fish biomass was 40% higher inside of the MPAs than outside.

For many years, CCMI researchers observed a decline in grouper density (quantity of fish), despite no-take zones at Nassau grouper spawning aggregation sites in season from 2003, until the Cayman Islands enacted greater protections in 2016 aimed at recovery of the population. Local protections include a seasonal blanket closure on Nassau grouper fishing, bag limits, gear restrictions, and size limits. The effects of these protections have been reflected in the 2021 CCMI surveys, as the grouper population density (all grouper species) continues to rebound.

Parrotfish density has increased by 47% from 1999 to 2021, which is also a positive indicator for reef health as they are key herbivores that feed on algae, which competes for space on the reef with coral. The effects are reflected in the overall health state of the reefs as 90% of surveyed reefs were classified as in a “good” (40%), “good+” (40%), or “very good”(10%) state based upon coral cover. This is an encouraging indicator, as fewer sites were classed as “fair” than in recent years, and no sites were classed as “poor”.

However, while coral cover remains relatively high, aided by recovering fish populations, CCMI’s 2021 survey data also demonstrates the vulnerability of corals to increasing threats of climate change and disease, for as they are slow-growing and unable to move (as many fish may do to seek refuge from stress events), they are not able to rebound or respond to stress events as quickly.

There has been a shift in the species of coral that dominate the reefs of Little Cayman from larger, boulder coral species to smaller, faster-growing species. This shift away from boulder coral species is reflective of a trend seen throughout the Caribbean region. The 2021 surveys also recorded a 60% decrease in the size of corals surveyed, reflective of the shift in coral species. The shift from larger species to smaller species has an impact on the overall function of the coral reefs as the larger boulder species build up the massive reef structure that is so necessary and which provides the critical wave break that protects coastlines in Little Cayman from storms, which are becoming increasingly powerful as an effect of climate change.

The vulnerability of coral species on the reefs is compounded by the 2021 survey data that shows new coral recruits, or baby corals, have declined by 83% from 2006 to 2021. Within that, researchers also see that of the species of recruits recorded, there are almost no Orbicella spp recruits and no Montastrea spp recruits after 2017, both of which are important boulder corals. If the local adult population experiences a mortality event, such as bleaching or disease, low recruitment means that the coral reefs are unlikely to recover quickly.

Local protections and low human impact have undoubtedly shielded Little Cayman from the extremity of global pressures that are heavily impacting reefs around the globe; however, changes are still occurring that put the reefs increasingly at risk. Understanding how low coral recruitment and the decreasing coral size can be mitigated is crucial for coral reef ecosystem management. The resilience of the coral cover and fish populations is a good news story that can largely be attributed to the success of the MPAs and specific species protections in the Cayman Islands.

CCMI’s surveys of Little Cayman’s reefs indicate that with appropriate management policies, coral reefs may be able to recover and display resilience to compounding pressures from regional and global threats. Investigating mechanisms of coral resiliency is crucial to understanding how corals may survive in the changing climate and future threats.

Learn more about this project and other efforts by CCMI’s scientists HERE.